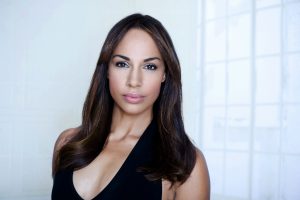 Amanda Brugel is a Canadian actress known for her scene-stealing performances in critically acclaimed series and films.

Brugel most recently starred in season two of Hulu’s award-winning drama THE HANDMAID’S TALE, based on the wildly popular book from Canadian author Margaret Atwood. Brugel plays ‘Rita,’ the Martha in the Waterford House on the show, which earned 18 nominations at this year’s Primetime Emmy Awards. It was announced the series will be returning for a third season on June 5th, 2019.

Up next Brugel can be seen alongside Jennifer Connelly and Daveed Diggs in TNT’s sci-fi drama SNOWPIERCER, which hits screens in 2019. Brugel also stars in the upcoming mystery thriller film THE EDUCATION OF FREDERICK FITZELL, starring Dylan O’Brien and directed by Christopher MacBride.

Brugel recently had a supporting role in the 2017 Netflix drama KODACHROME opposite Jason Sudeikus and Ed Harris, which at premiered at the 2016 Toronto International Film Festival. She was honored for her performance in the film by Telefilm Canada at the Birks Diamond Tribute to the Year’s Women in Film as one of the Twelve Celebrated Canadian Female Actors, Directors and Screenwriters.

Brugel graduated with a Bachelor of Fine Arts in Theater from York University and currently lives in Los Angeles.