Ernestine’s is honoured to present a virtual screening of the award-winning film “Queen of the Morning Calm” by writer/director Gloria Ui Young Kim. 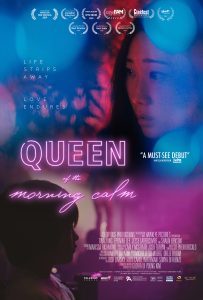 What:
Joint Movie Fundraiser with Red Door Family Shelter featuring a screening of “Queen of the Morning Calm” and
a pre-recorded Q&A with the director and actors on Sunday
When:
Friday, 29th (All Day) – Sunday, 31st of January (All Day)
Where:
Online (http://ow.ly/xAMM50DdPEP)
“Queen of the Morning Calm” follows 29-year-old immigrant sex worker Debra, and her self-aware 10-year-old daughter Mona, as they embark on a journey of emancipation. Debra attempts to escape cycles of abuse and poverty while learning to become a more nurturing mother and discovering her own self-worth.

“I’m a survivor of violence. This has affected how I walk in the world. Most people are really uncomfortable when I talk about it — they would rather I shut up. Well, I won’t.” — Writer/Director Gloria Ui Young Kim

Why “Queen of the Morning Calm” Matters & Why You Should Watch It:
“Women are for sale,” Kim explains. “This is just a fact. The strength of the #MeToo Movement comes from our collective female consciousness finally rising up in outrage at being told to shut up and be pretty. We won’t. I want to change the prevailing notion that women are victims, that we are a commodity and that we need a man to survive. We don’t have to keep taking it. Instead, I say we are the heroes of our own journey, that we can tell our own stories, and that a mother and a daughter can band together and be each other’s true love.
“Queen of the Morning Calm” is a story for our own times. It’s a story of redemption. It’s a story of love. It’s a story of hope. And it’s a story of advocacy. It’s a very personal story for me, and it’s something I am compelled to do out of my own history of violence and my own journey of healing and self-acceptance. Let’s show the world that women’s experience matters. Let’s help our women and girls.”
Help support Ernestine's and Make a Donation to Support Women and Children Fleeing Violence!
If you or someone you know is in an abusive situation, you CAN get help! Call 911 in an emergency, or contact our Crisis Line at 416-746-3701 and dial extension 0.
To learn more about our movie fundraiser and to keep up-to-date about Ernestine’s and other upcoming events, follow us on Facebook, Twitter, Instagram, and LinkedIn!
GET HELP
DONATE NOW
DONATE ITEMS

of young women who have been raped knew their rapist; the perpetrator was or had been a boyfriend, friend, or casual acquaintance.